We have seen a few standing buddhas from Gandhara with the same type of backplate (with elongated lotus petals tipped with three precious jewels all along the edge of the two-piece mandorla). This one is a rare example depicting Shakyamuni seated on a throne supported by two animals (lions?) atop a Swat Valley style double lotus base, wearing the four-pointed cape usually seen on Crowned Buddha images.

Standing on a lotus pedestal decorated with a large turquoise-inlaid flower, this irate female with three eyes and bared fangs holds a vajra sceptre in her right hand, with her arm held down, and a skull cup or a bowl in the other. She wears a minimal bone apron with raining-jewel pendants, a (damaged) five-skull crown, floral jewellery, a garland of severed heads. The victims under her feet, who probably embody ignorance and ego, each hold a flaying knife and a skull cup.

Vetali, one of the eight great dakinis, holds a tortoise in her right hand and a skull cup in the other.

Wrathul Vajrapani standing on a singular pedestal with a large lotus flower at the centre, brandishing a vajra sceptre in his right hand and making a wrathful gesture with the other, adorned with snakes, including on his ears. His hair forms a naga hood behind his low Pala-style three-leaf tiara. His loin cloth (usually the whole skin of a tiger) has no animal head, legs, or tail showing.

This one comes complete with a vajra lasso wound around his forefinger. He wears a human hide on his back, which is unusual for this deity (yet we can see a hand hanging over his right arm), a tiger skin knotted around his belly, a Chinese-style cross-belt with jewelled pendants, writhing snakes, a five-skull crown with three jewels and a half-vajra on top of each skull, floral earrings and a matching necklace. He crushes two victims with no snakes under them.

It is most unusual for the tarjani mudra (forefinger raised, other fingers closed) to be made with the back of the hand facing the viewer.

Almost identical to a Mongolian-style figure seen on Christie’s (see photo here ), the above depicts a variant of chanda Vajrapani who points sideways with his left hand. He has a very large tiger skin around his waist, another hide on his back, a leonine face in his mitre-like flaming hair, and is adorned with a skull crown, bone jewellery, a Chinese-style cross-belt, a long snake, and a garland of severed heads.

A rare and early metal image of Hayagriva (identified by the horse’s head on his flaming chignon) depicted as an attendant: he leans on a danda staff and raises a hand (vandana mudra) towards the main deity he accompanies, usually Tara or Avalokiteshvara. A billowing scarf forms a nimbus behind his head and he is adorned with snakes, including one to hold his short dhoti in place and another worn as a sacred thread. 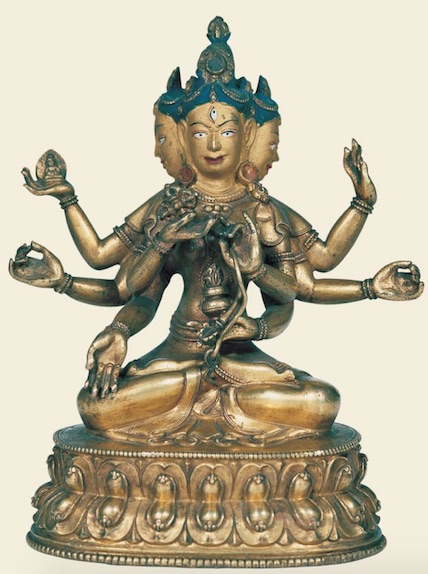 Ushnishavijaya in her three-head and eight-arm form, holding a visvajra and a lasso in her main hands, a water pot in the lower left one, an effigy of Amitabha in her upper right one, a bow and arrow now missing from her middle hands. The lower right hand makes the gesture of supreme generosity, the upper left one makes the fear-allaying gesture. She has three peaceful faces, each with a third eye.

This is the same form of this long-life deity, whose name means ‘victorious goddess of the ushnisha‘, but only her right face is peaceful. The main one is semi-wrathful, and, judging by the red eyebrows, the left one maybe wrathful. 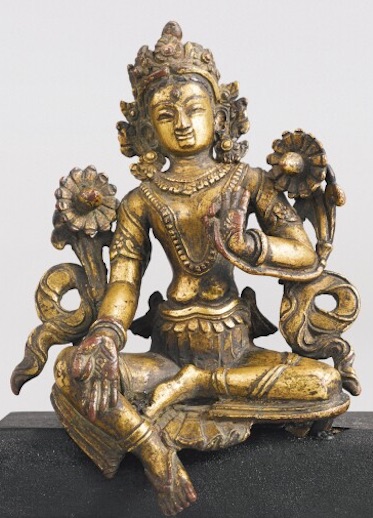 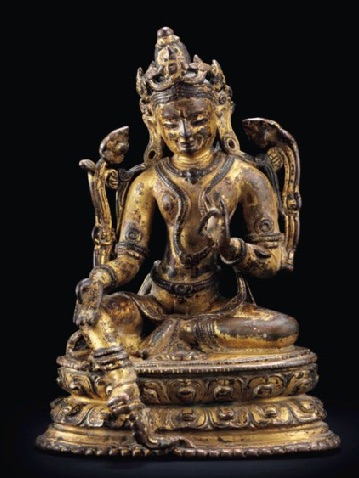 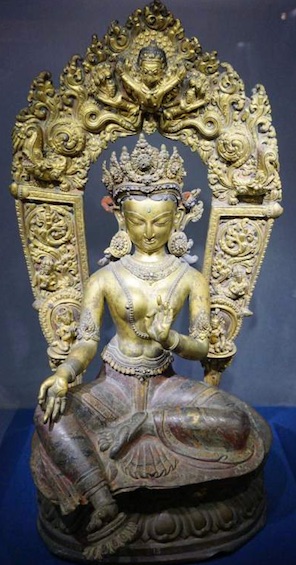 Green Tara making the gesture to bestow patience with her left hand (tip of middle finger on tip of thumb) and the gesture of knowledge with her right hand.

A standing version, her crown missing. 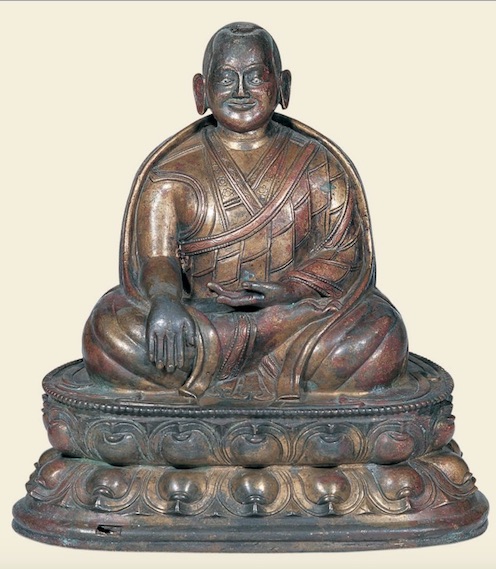 For the sake of accuracy, all posts including sculptures photographed by Ulrich von Schroeder in Tibet are being updated and will have a direct link to the relevant page on his online publication Buddhist Sculptures in Tibet .

All the sculptures of Phagmo Drupa/Pagmodrupa that we have seen so far depict him seated in the vajra position, with his right hand ‘calling Earth to witness’ and the other in the gesture of meditation, like most images of the historical buddha. (for biographical notes see Treasury of Lives ) 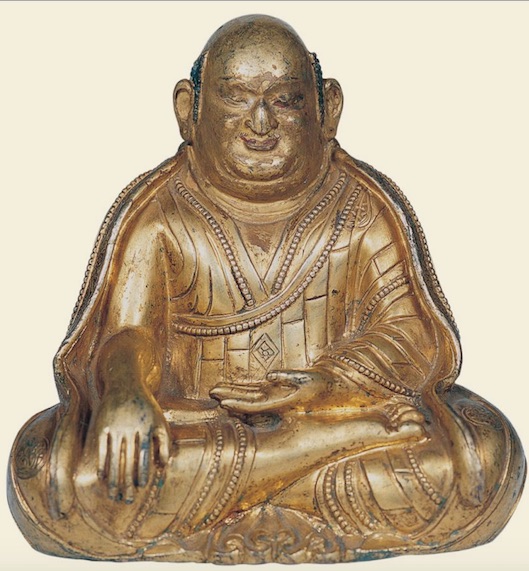 A singular portrait of an elderly man, bald and with a double chin, dressed in full monastic garments with a beaded hem (a vest, a lower garment, an outer robe that leaves his right arm bare, and a meditation cloak), his robe engraved with a ‘lotus within a diamond’ symbol at the front.

For the sake of accuracy, all posts including sculptures photographed by Ulrich von Schroeder in Tibet are being updated and will have a direct link to the relevant page on his online publication Buddhist Sculptures in Tibet . As a result of this updating, it looks as if two items in the above-mentioned publication have each other’s title, i.e. Tara is labelled Maitreya and vice versa (incidentally, on the Himalayan Art Resources they are published as ‘Tibet, Buddhist, private collection’ but further down item 30235  is labelled ‘Maitreya’ and item 30234 is labelled ‘Tara’).

The position of this buddha’s left hand is most unusual; the other hand is raised to dispel fear and shows well-modelled delicate fingers. He wears a patched robe that covers both shoulders but leaves his right arm free.

Dressed in a diaphanous garment, the end folded over the left shoulder, the historical buddha dispels fear and cups his left hand in the gesture of meditation. 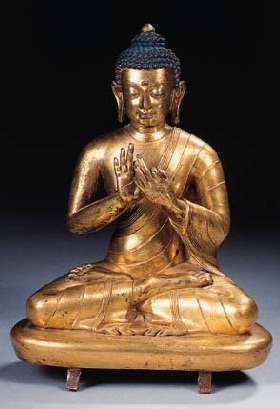 Making the preaching gesture (turning the wheel of dharma) with his hands apart, he wears a finely pleated sanghati  that covers one shoulder only, with no pleated cloth on it. 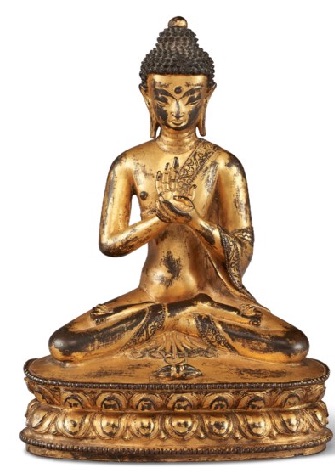 Making the same gesture with one hand facing the other, a vajra sceptre placed before him to symbolise the place where he made his first sermon. His transparent sanghati has an embroidered border with a lotus motif.