1) STANDING FIGURES WITH A FLORAL GARLAND

The garland made of individually crafted flowers is specific to an early group of standing figures, most of them created by Kashmiri artists for Guge patrons. Their body shape and proportions are realistic and include the typically Kashmiri cruciform navel and lobed abdomen. Their prominent knee caps recall the earlier rock-carved statues of Maitreya at Mulbeck and Kartse Khar in Ladakh (See here)

They all wear a dhoti much shorter on the left side, with a pointed end dropping towards the pedestal on the opposite side. The garment is normally engraved with a floral and vine motif and held in place with a belt, which may consist in one or several rows of beading and an ornate belt or a strip of cloth knotted at the front.

The armlets usually consist in one or more rows of pearls, with three jewelled pendants dangling below or a single decorative element above. 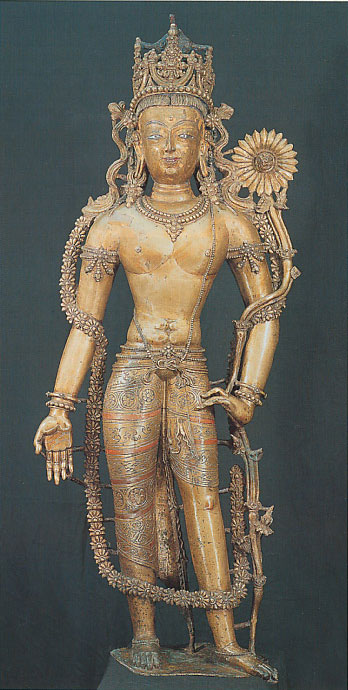 Following the Kashmiri tradition, the eyes are inlaid with silver, and the lips may be made of copper, but metal inlay may also be used to colour the lower garment. The tall crescent moon and floral sections of the crown are topped with a jewel and secured with rods.

For this remarkable work the artist used tin rather than copper. 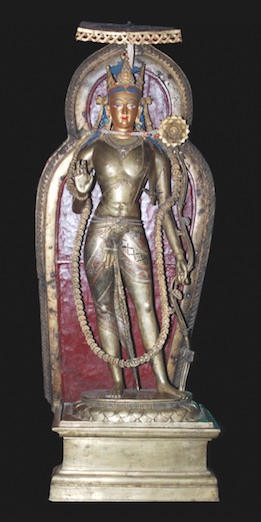 11th century, Western tibet, Guge, Avalokiteshvara, brass, commissioned by Rinchen Zangpo for a monastery near Tholing and made by a Kashmiri artist called Bhidaka, published by Dr Amy Heller (see the relevant post).

A mixture of three different metals seems to have been used for this dhoti, silver, copper, and possibly niello. Avalokiteshvara wears a Ladakhi-style tripartite crown.

The following are derived from the Guge style but noticeably different in some aspects.

With a floral garland but a plain dhoti, no crown and no necklace, a full face and tripartite hairbunch.

With odd facial features and unrealistic body shape and proportions, adorned with beaded hoops rather than floral earrings.

With a Ladakhi-style crown, a strangled waist, and a bulky garland.

2) STANDING FIGURES WITH A FOLIATE GARLAND

The standard Kashmiri garland, made of braided leaves resembling a continuous sheaf of grain, is more common in Western Tibet and often goes with a different style of accessories. 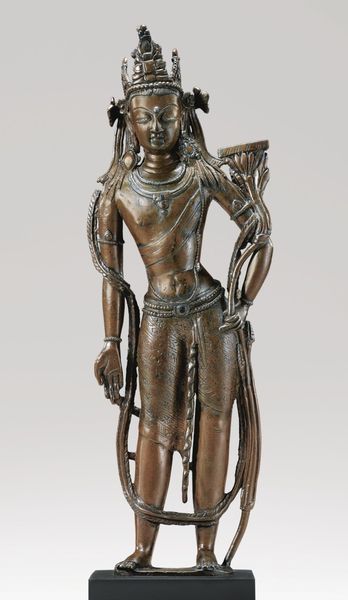 The crown may be lower and simpler, consisting in three triangular shapes. The armlets are more often of the beaded type with a singular decorative element above, but not exclusively.

A rare Maitreya with a stupa on his head and a foliate garland made of copper.

Occasionally there is a flower at the bottom of the foliate garland. On the second picture, the bodhisattva wears beaded hoops.

3) STANDING FIGURES WITH A BEADED GARLAND 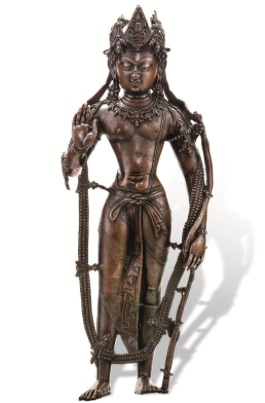 This bodhisattva wears a garland made of three rows of beads. 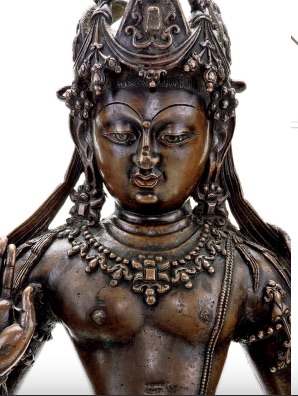 His crown has a crescent moon and triangular leaf design, with jewelled pendants dangling over his forehead. 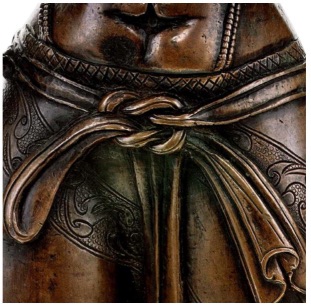 His dhoti is decorated with bands of embroidered fabric and held in place with a thin belt knotted in a particularly ornate manner at the front.