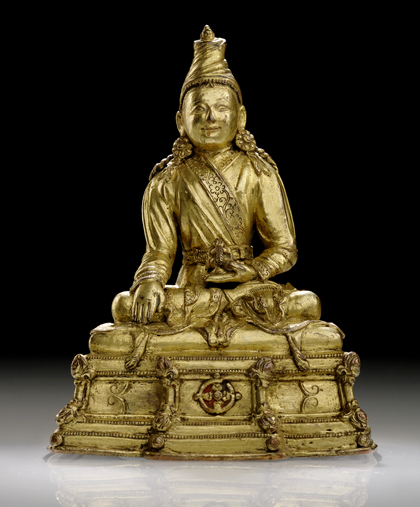 Like most images of Songtsen Gampo, 33rd king of Tibet and founder of the Tibetan empire, this personage wears a turban shaped like a truncated cone topped with Amitabha’s head. He is seated on an antelope skin over a cushion atop a throne decorated with a visvajra at the front and holds a long-life vase in his left hand.

Undated, Tibet, Songtsen Gampo, at the Potala, photo by Ernst Krause, suggested by Matt, a reader of this blog, published on https://commons.wikimedia.org/wiki/File:Bundesarchiv_Bild_135-KA-07-057,_Tibetexpedition,_Statue_im_Potala.jpg.

Sculptures of Tibetan kings are so rare that even fairly recent ones have a place in this post. On both images he is seated on two square cushions covered with an antelope skin and wears a necklace with a very large amulet box.

According to an inscription on the base, this is probably a portrait of Kunzang Nyida Drakpa made during his life time. The king appears as a mahasiddha, seated on a tiger skin and adorned with the usual bone jewellery, cross-belt and spiral earrings, holding a vajra sceptre and a long-life vase.

An inscription on the base identifies this king, about whom very little is known.

King Songtsen Gampo is seated at royal ease, his right hand doing the fear-allaying gesture, the other resting over his knee. He wears a truncated conical hat topped with the head of Amitabha.

The thirty-third king of Tibet lived during the 7th century and introduced Buddhism to Tibet well before Padmasambhava was invited there by his grandson. 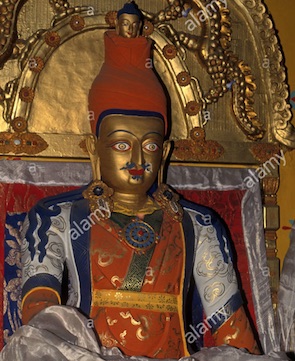 He came from the Yarlung dynasty, based in Central Tibet. 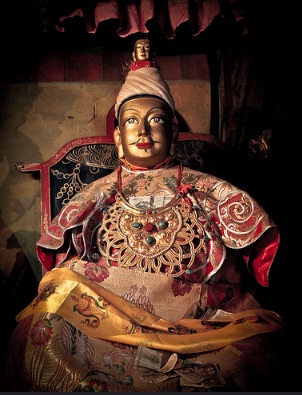 King Songtsen Gampo, Tibet, Yumbulagang, Yarlung Valley, photo by Erik Törner on IMs photo archive.In an effort to strengthen the bond between the various Tibetan people and unifying the small kingdoms of Tibet, he wished for a written version of the Tibetan language to be invented. Thus the Tibetan alphabet and grammar were born. 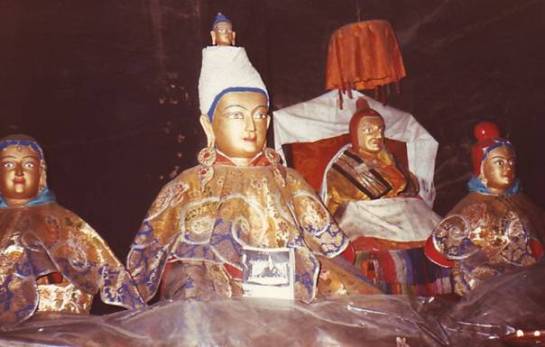 Undated, Tibet, king Songtsen Gampo and his two wives, at the Jokhang in Lhasa, published on http://www.rinpoche.com.

He had two wives, one from Nepal and another from China. 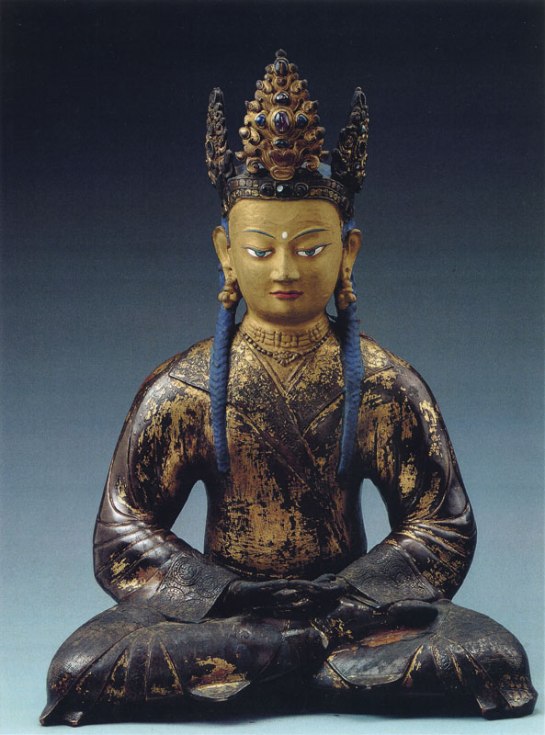 14th century, Tibet, dharma king, gilt copper with cold gold and pigments, at the Potala in Lhasa, published on asianart.com in Michael Henss’s review of the exhibition and corresponding book ‘Tibet – Monasteries Open their Treasure Rooms’.

This character with a kingly appearance wears a three-leaf crown inlaid with stones, a fine outer robe with embroidered collar and cuffs, two chokers and small lotus earrings. His hands, in the meditation gesture, may have held an attribute. Experts don’t seem to agree as to whether this is an idealised portrait of an historical king, a mythical king or a deity, such as Amitayus, although the overcoat held in place with a belt suggests the former. 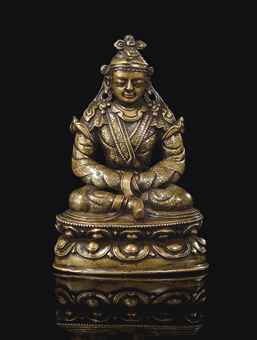 Trisong Detsen normally has both hands in the turning-the-wheel-of-dharma gesture, or holds a wheel of dharma with both hands. He doesn’t always have a vajra finial on his chignon as above.

The way this noble man holds his right hand, with the forefinger pressed against the thumb, is associated with king Songtsen Gampo, whose (broken) headdress would have been topped with an effigy of Amitabha. He is seated on an animal skin (antelope or deer) over two cushions covered with a cloth (typical of the 18th century).

This unidentified Tibetan king has a raining jewel in his right hand and another object in the left hand. There is a set of three flaming jewels (triratna) on top of his head. 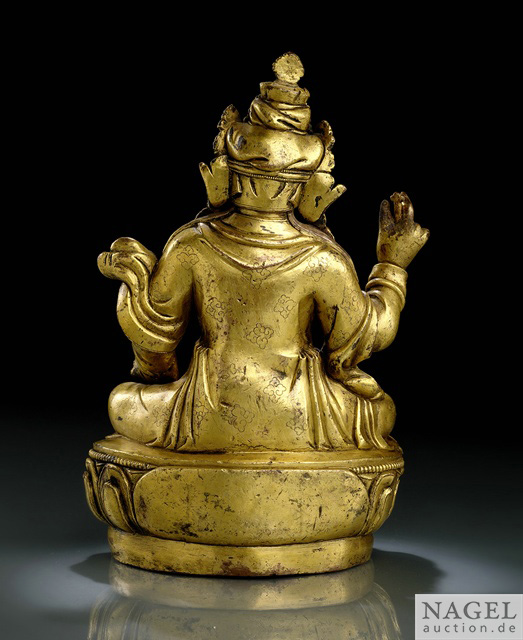 A view of the back shows us that his hair is wrapped in cloth, and his robe decorated with an incised visvajra (double thunderbolt sceptre) motif. 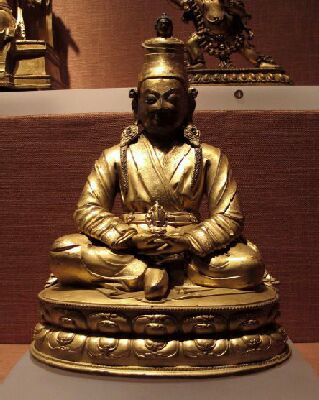 Songtsen Gampo is usually represented seated with one leg unfolded, wearing a thick gown fastened with a belt and some thick boots. He often holds a long-life vase in one or both hands.

His legs may be in the lotus position.

He wears a tall turban wrapped around his head, like a truncated cone, and topped with the head of Amitabha. A  long strand of plaited hair falls on each shoulder. The above example has a moustache and goatee like Padmasambhava.

Same as above, at the Jowo Lakhang in Lhasa, published on chinabuddhismencyclopedia.com

He often wears large earrings which can range from simple to very elaborate designs.

On this sculpture, the king sits on an elaborate throne supported by two lions and two elephants, a long-life vase at the front, a row of thunderbolts at the bottom. The back panel is decorated with a garuda at the top and other mythical creatures on the sides.  There is a bowl under his right hand.

King Songtsen Gampo, 13th-14th century, Tibet, gilt copper, cold gold and pigments, is or was at the Potala in Lhasa (Tibet), item 101501 on Himalayan Art Resources.

King Songtsen Gampo, Tibet, 15th century, copper alloy and cold gold, inlaid with turquoise and a crystal cabochon in his crown, at the Museum der Kulturen in Basel (Switzerland). 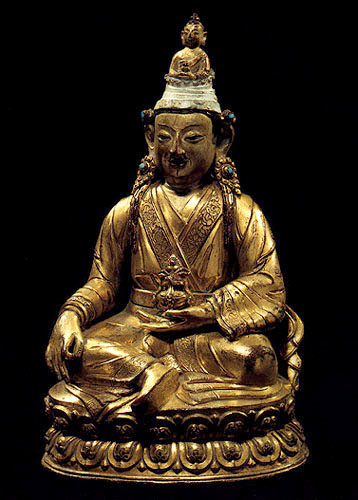