Apart from his normal peaceful form, Padmasambhava, the Indian master who co-founded Tibetan buddhism during the 8th century and acquired cult status in the 11th century, may be depicted under another eight forms, some peaceful, some wrathful or semi-wrathful. 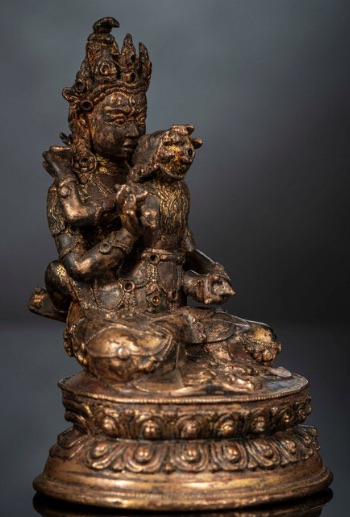 Orgyen Dorje Chang (Oddiyana Vajradhara in sanscrit) has a semi-wrathful countenance, with a third eye, and sits in embrace with his consort, Mandarava, who holds a skull cup and a flaying knife. He holds a vajra sceptre and a vajra bell, but not with his hands crossed over her back like Vajradhara. 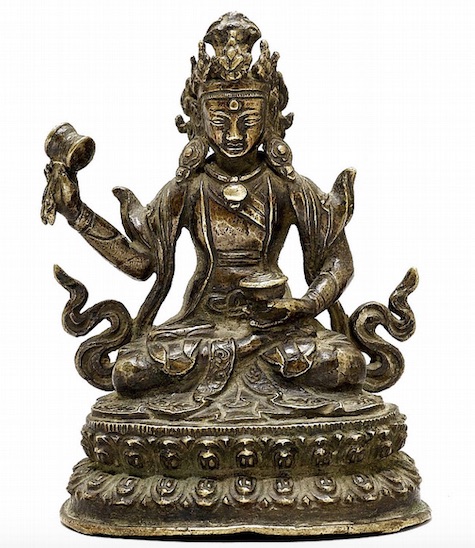 Loden Chogse wears kingly attire (including long-sleeve upper garments), boots, a scarf, a crown, and princely jewellery. He is always seated, with his legs locked or in a relaxed manner, and holds a drum at shoulder level in is right hand and a skull cup in the other, before his chest.

Nyima Oser has a mahasiddha appearance, he sits in a relaxed manner, wearing only an undergarment and a thin scarf, adorned with a skull crown, bone jewellery, a cross-belt. He holds a ritual staff (khatvanga) and sun rays/a sun disc or a lasso (both attributes missing here).

Pema Jungne wears monkish garb, sometimes without the vest, and is always coiffed with a pandita hat. He holds a bowl in his right hand while the other may express a variety of gestures, in this case the gesture of debate.